WE ARE STLL HERE

​​to the rear seats. During the 1930’s the center bimah was removed, but the women remained separated until the 1950’s when mixed seating became the tradition. In 1957 an addition was completed providing modern classrooms, administrative offices, meeting rooms and an auditorium.

Fifteen years later, the current building was constructed on Summit Avenue and the name changed to Temple Beth El. In 1974 the Hasbrouck Heights Jewish Community Center merged with Temple Beth El to form one united synagogue serving the greater Hackensack area. The congregation is now egalitarian with women having full participation in all aspects of the services.  Under the leadership of Rabbi Robert Schumeister since 1980, Temple Beth El continues to be a vibrant presence for all aspects of the Jewish community and family life in Hackensack.

Over 100 years ago the Jewish community in Hackensack organized to provide religious services to its Jewish residents. Their services were first held at the State Street Armory, later the German Odd Fellows Hall on Main Street, followed by the Bergen County Odd Fellows Hall also on Main Street. After several years, this Hackensack Jewish congregation took the name Hackensack Hebrew Institute and rented the Washington Institute on Main and Warren Streets for evening services and afternoon Talmud Torah classes. In 1921, a year following the opening of a kosher butcher in town, the Hackensack Hebrew Institute opened its doors on the corner of State and Meyer Streets. At that time, the bimah was in the center and the women were restricted 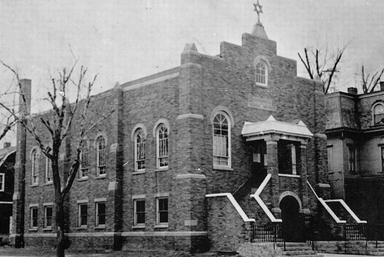